Adobe removed the old “layout adjustment” feature from InDesign 2019 and replaced it with the new “adjust layout” feature. Yes, that’s as confusing as it sounds.

I guess their idea was that the new feature is a replacement for the old. But in this I think they were mistaken.

The new “adjust layout” feature is not bad if you need to change document size. Set the new size, and InDesign, using some sort of “artificial intelligence,” will attempt to rearrange all the page items in the document to match the new page size in a way that makes sense. Sometimes it works, sometimes not so much.

The old “layout adjustment” feature was much simpler. It didn’t attempt to bamboozle us with new Sensei technology (I think that’s what Adobe calls their AI engine). Instead, it followed a strict set of rules. Staying within certain limited user-defined parameters, the old feature would move and/or resize objects if the margins of a page (or ruler or column guides on the page) were changed by the user. So if an object such as a text frame had one or more sides sitting on a margin guide or column guide and these guides were moved, “layout adjustment” would ensure that the object moved as well.

How much “layout adjustment” caught on I’m not sure. I think it did a decent job. But it had 2 advantages over the new “adjust layout” feature:

(1) It was predictable and reliable. You knew pretty much exactly what would happen if you modified the margins or guides on your page with layout adjustment switched on. But it’s the second advantage that I want to focus on here:

(2) With “layout adjustment” switched on, if the user applied a master page to a regular document page and that master page had different margins or guides than the page currently had, applying this new master would resize and adjust any page items, particularly text frames, on the page. The new “adjust layout” feature does not do this! It probably should, but it doesn’t. And even if it did, it doesn’t work as reliably and predictably as the old feature.

Why was this important? Well, many typesetters of long documents relied on this feature to increase the top margin of a chapter-opening page in a long document, and decrease, correspondingly, the height of the text frame on that page. You know how chapter titles start lower down on the page? By applying a special “chapter opening” master page to chapter title pages, it was easy to do this by setting a bigger top margin for these master pages and switching on “layout adjustment.”

(Personally, I never used this technique. There are other ways of lowering a chapter title, and I think that instinctively I was wary of using a technique that never quite felt like it was intended to be there – it always felt like it was kind of there by accident – and that could always be removed from InDesign on whim. As in fact has now happened.)

Nevertheless, many typesetters I know did rely on this technique. And there are other equally legitimate cases where it would be convenient to have text frames and other page items resize and adjust if a master page with different margins and columns were applied to the page.

But with InDesign 2019 (at the time of writing; there are signs that Adobe are considering bringing this feature back; in fact, please click on this link and add your voice to make sure they do so!) there is no way of making this happen, and it’s a real problem.

So, I began wondering if there were a way to alleviate this issue with a script.

Clearly, with a script it would not be possible to reinstate the full functionality of layout adjustment, because, as with most InDesign features, this is implemented as a fully-fledged plugin that is completely integrated with InDesign’s UI. Nevertheless, it did seem possible to do something to improve the situation. So I have written the following script, and it’s available to download freely below.

The idea is that the script should apply master pages and at the same time emulate InDesign’s old layout adjustment feature. I wrote a basic routine to emulate this. It doesn’t provide all the options of the old feature but does use a basic, useful set of defaults (snapping is set to 1pt, text, graphics and groups are all resized).

At first I thought that the script should provide a couple of simple dropdowns allowing the user to select the master page they wish to apply and the target page they wish to apply it to. But on further thought this seemed really clumsy. InDesign provides so many ways for the user to apply master pages to regular live pages: via the Pages panel, via the Layout menu, and with various shortcuts. Limiting all this to a couple of dropdowns felt like a major step backwards.

I was tempted to use a built-in scripting event to intercept the process whenever the user applies a master to a page. This would have been ideal, and, if this were a C++ plugin, it could probably be done. However, InDesign’s scripting DOM provides no such event, so I had to scrap this idea.

The solution I came up with in the end is like this, and these are, in fact, the correct steps for using the script, so I’ll start a new section right here!

How to Use the Script “Apply Masters with Layout Adjustment”

The first thing to realize is that this script is only useful for those running InDesign 2019. All previous versions have layout adjustment built in, making this script completely redundant. In fact, if you try, the script will tell you so and quit. (No damage done to the document or anything, it just won’t run!) But if you are using ID 2019, this how to do it.

(1) Apply master pages as usual, using InDesign’s regular UI. Use all your favorite shortcuts and methods. (See why this system is better than fiddly dropdowns!)

(2) Do not do anything except apply master pages. Do not type, move objects, change preferences, or anything else!

(3) When you have finished applying master pages, run the script before doing anything else. This means that if you look at the Edit menu in InDesign before running the script, the first entry in that menu should say, “Undo Apply Master Pages.” That’s the sign that the last thing you’ve done is apply master pages and nothing else! You do not need to look at this menu. This is just a way of making sure that the last thing you’ve done is apply masters.

(4) So, what does the script do? A number of clever things! It stores the current master page configuration, and then undoes all previous “apply master page” actions you have performed until it finds that you did something else. Now that it’s taken the document back in time, it reapplies all the master pages applied, but at the same time runs its “layout adjustment” emulation so that text frames and other page items resize or move as needed to maintain their relative position to the margins!

If you’re used to using the old Layout Adjustment feature, I’m hoping you’ll find this very useful! No, it’s not as convenient as having Layout Adjustment built into InDesign. It does require an extra click to run the script. But it’s still only one extra click and you get a lot of familiar functionality back for spending that click!

Before I sign off, a quick confession! It is not pure altruism that prompts me to write this script.

Mastermatic is one of the most popular Id-Extras.com InDesign add-ons in our library. If you are not familiar with it and you typeset or design long documents, you really should do yourself a favor! I think most of the major world publishers at this stage have kitted out their entire typesetting teams with Mastermatic. So honestly, if you want to work like a typesetting pro, check out Mastermatic!

What Mastermatic does is to automatically and dynamically assign master pages to you document based on the paragraph styles or object styles that appear on document pages.

For instance, with Mastermatic it is easy to tell InDesign that wherever a “chapter opening” paragraph style appears in the document, there should be applied the corresponding “chapter opening” master page. And now we’re back to the initial problem.

I was getting feedback from InDesign 2019 users that Mastermatic also suffered from the no-layout-adjustment problem. They were used to setting it to apply an appropriate chapter-opening master page and having that modify the text frame on the chapter opening page, and this was no longer happening.

Of course this is not a Mastermatic bug. It’s just the way Adobe chose to do things in 2019. But placing blame helps no one. So I wrote this “layout adjustment” emulator and have incorporated it as a free Mastermatic update, which is now on version 2.2.5. So now Mastermatic users can experience the familiar behavior they are accustomed to from pre-2019 days. 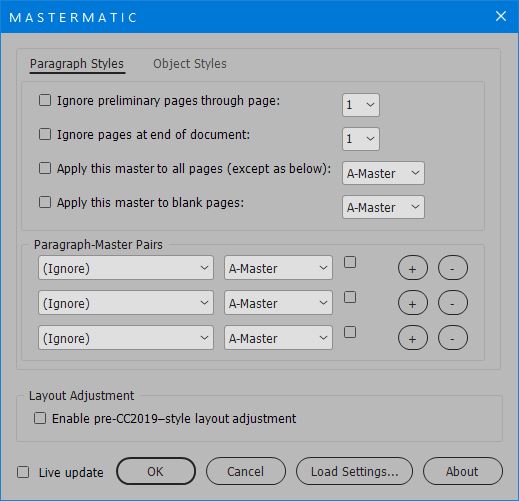 Still, a bit of altruism remains. Since the routine had been written, why not wrap it in a simple, free InDesign script so that everyone who needs it can get back something similar to the old layout adjustment feature, at least when applying master pages to document?

Which is why I’ve made this script available for free. Fill in your name and address and it will be automatically emailed. By doing so you also agree to receive occasional emails from Id-Extras.com with interesting InDesign tips and tricks, news, and free scripts.

And I have also taken the liberty of including the trial version of Mastermatic, because I’m confident that if you’re the sort of person who finds this free script useful you will find Mastermatic even better! 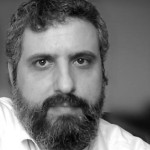