After a long wait, the latest version of InDesign, 2019, has finally introduced the ability to select a font for interactive PDF form fields.

Until today, interactive form fields created in InDesign would always be set to Times Roman when opened in Acrobat. Times is a dubious choice for a form field. Wouldn’t a sans-serif – Helvetica or Arial – have made more sense? But that was Adobe’s choice, for better or worse, and any designer working on interactive forms in InDesign knew that they would have to change form field fonts afterwards in Acrobat, once the PDF had been exported.

I created FormMagic (an InDesign/Acrobat add-on for anyone making interactive forms in InDesign) in large part to make it easier to choose a default font for interactive PDF form fields. Making it easier means allowing the user to choose fonts for form fields inside InDesign, for two reasons:

(1) If the font has to be set separately in Acrobat, each time a design change is made to a form that requires opening the InDesign file and re-exporting the interactive PDF, all work done in Acrobat – applying fonts to form fields, plus any other special field formatting – has to be redone. Many forms go through multiple editing cycles, and it’s no fun repeatedly redoing the same work in Acrobat.

(2) Applying fonts to form fields in Acrobat is a fiddly business at best. The field has to be selected, then a right-click to open the properties dialog, then switching to correct tab and locating the font in a dropdown menu. Compare this to applying fonts to text in InDesign! InDesign is created to make it easy, quick and efficient to do so: not only does it offer a great font menu, it also provides paragraph and character styles with keyboard shortcuts – important features that make applying text formatting a doddle.

With FormMagic, fonts, colour, size, text alignment, rich text, and even comb fields, can all be applied to form fields inside InDesign using InDesign’s native text formatting tools. It’s as easy as applying a ready-made paragraph style to each form field.

The ability to choose fonts for form fields (and to choose them easily and efficiently) in InDesign is undoubtedly one of the reasons for FormMagic‘s popularity, since prior to InDesign 2019 it was not possible to do this in any way.

But in InDesign 2019 Adobe have finally given every user a way to apply fonts to form fields natively. The end of FormMagic?

After extensive testing, I can state that FormMagic beats InDesign 2019 hands down when it comes to applying fonts to form fields for the simple reason that InDesign does not embed the selected fonts in the exported PDF. FormMagic does!

If you choose a font family for a form field in InDesign, the end user – that is, the person filling-in the interactive PDF form using Adobe Reader – will only see the font the designer has chosen if they have it installed on their own computer! If the font is not installed, they will get some weird, distorted typeface instead. I’m not quite sure which typeface it is, and I suspect that it is weird and distorted because the font metrics are passed to the PDF, and Acrobat is trying to match those font metrics (that is, the widths of the individual letters of the font) by stretching its own generic serif or sans-serif font.

In short, to use InDesign 2019’s method for selecting the form-field font is to rely on the end-user having that font installed on their system, or to risk an ugly, generic substitute font appearing in its place.

… compared to how it works with FormMagic

But when you use FormMagic to apply a font choice to a form field, that font is embedded in the PDF.

This means that the designer has a free hand to choose the best fonts for the project without needing to worry that the end user may not have those fonts installed on their system.

(In fact, this font-embedding happens when any font is applied to a form field in Acrobat. It is Acrobat that is delivering the embedding mechanism. FormMagic simply takes advantage of this whereas InDesign does not.)

So, with FormMagic there are no surprise fonts substitutions with ugly generic fonts because the font is embedded in the interactive PDF that is shared with customers.

(2) Have You Tried Using that Font Dropdown Menu?!

Under this category, let’s mention FormMagic first so we have an idea of how it should have been done!

To choose a form-field font, and a font size (and the text colour and alignment), with FormMagic, all that needs to be done is apply the desired formatting to the default text inside the form field in any one of the regular ways: using paragraph or character styles, using the Control panel, etc.

There is nothing new to learn, the process is familiar, intuitive, and efficient. It could not be easier.

Choosing a font for form fields without FormMagic is neither quick, efficient, nor convenient: Adobe have added to the Buttons and Forms panel a tiny dropdown menu for selecting the form-field font. It is right there alongside the tiny dropdown menu for selecting the font size (the size menu has been there all along and is now joined by a font menu). 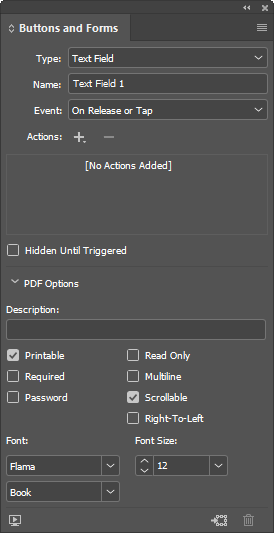 Honestly, this is not a user-friendly way of designing. Each form field in turn has to be selected, the Buttons and Forms panel opened, and the correct font chosen for each field (no font preview in that menu, by the way).

So for ease of use and efficiency, FormMagic wins hands down again!

So that’s the fonts issue in a nutshell.

Of course, fonts aside, there have always been other reasons to use FormMagic.

With InDesign 2019, nothing has changed with regards applying color, text alignment, rich text formatting, default text, or creating comb fields. You never could, and you still can’t.

FormMagic makes all this possible within InDesign, and always will.

And Let’s Not Forget FormMaker

FormMaker is FormMagic’s big brother. It offers all of FormMagic’s feature, but also allows attaching Javascripts to form fields inside InDesign. These scripts can be triggered in the interactive PDF by mouse or keyboard events, or whenever standard Acrobat calculation, validation or formatting events take place.

The main point of this blog post was to report that, after extensive testing, I can confirm that InDesign 2019 does not embed the fonts selected in the new form-field font-selection dropdown, meaning that there is no guarantee that the interactive PDF’s end-user will actually see the fonts the designer has chosen, whereas FormMagic does embed the form-field fonts in the final interactive PDF form, ensuring that the end-user will see the form exactly as the designer intended.