The InDesign script Page Numbers to Words makes it easy, quick, and practical to replace or complement the existing page numbers in an InDesign document with their written-out equivalent in any language.

In fact, Page Numbers to Words isn’t limited to written-out page numbers. Any labels that need to be inserted sequentially into a document’s pages can be easily inserted with this script. At the end of the guide, we’ll include a couple of examples of using the script in other ways.

Page Numbers to Words works with every version of InDesign from CS5.5 up to the latest version (which, at the time of writing, is CC2018). It works on both Macintosh and Windows computers.

Note that the text frames should of course be wide enough to accommodate the longest written-out page number you expect to have. 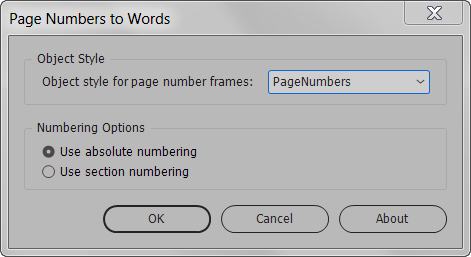 Page Numbers to Words will now search throughout the entire InDesign document. Wherever it finds a text frame with the selected object style applied to it, it will insert into that text frame the written-out page number as it appears in the “PageNumberList.txt” file.
For instance (presuming “Use absolute numbering” is selected), if on page 16 of the document the script finds a text frame with the style “PageNumbers” applied to it, it will read the 16th line in the PageNumberList.txt file, and copy the text it finds into that text frame. On the 17th page, it will read the 17th line and copy that text into the text frame, and so on. The end result might look like this: 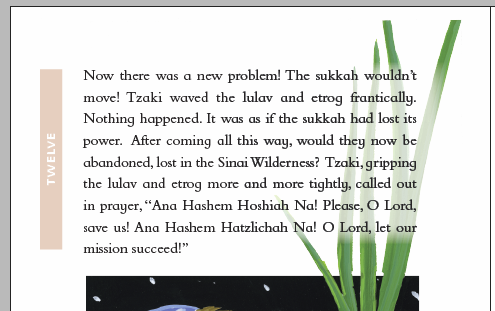 The written-out page numbers do not update automatically, so if the document’s pagination is modified at any stage, rerun the script to update the numbers.

Adobe explains the difference between absolute and section numbering as follows:

The Pages panel can display absolute numbering (labeling all pages with consecutive numbers, starting at the first page of the document) or section numbering (labeling pages by section, as specified in the Section Options dialog box). (https://helpx.adobe.com/indesign/using/numbering-pages-chapters-sections.html)

For example, often, preliminary pages in a book will be numbered with roman numerals, with renumbering restarting at 1 with the first page of the main section of the book. This is an option that can be set in the Section Options dialog box. If your document has 12 prelims, and page 13 of the document is set to restart the numbering at one, choosing “Absolute numbering” in the Page Numbers to Words script will insert “Thirteen” in a text frame on that page. If “Section numbering” is chosen, the text frame on page 13 will show “One”.

Page Numbers to Words supports renumbering an entire InDesign book. Just make sure to open the book in InDesign before running the script. If it detects an open book panel, it will ask whether to run the script on all documents in the book.

Writing Out Numbers in Languages other than English

Page Numbers to Words comes with list of English number until 10,000 written out in full.

If you need the numbers written out in a language other than English, you must supply your own written-out list. Make sure to use a plain text editor (such as Notepad on Windows) and write one number per line. Save the file (for languages that use extended character sets, make sure to set the encoding to UTF-8) and place it in the same folder as the InDesign file you want to number.

TIP: Try using Google Translate (translate.google.com) to translate the provided English-language number list to almost any other language. In my experience, for all numbers up to around 1200 Google Translate does a decent job and should get you 95% of the way there.

Since Page Numbers to Words simply reads the required label from a provided file (e.g. for page 50 it will copy the text from line 50 of the file), it is possible to use the script in other ways as well.

For instance, I have occasionally been asked if there is a way to have the same number on both left and right pages. Since Page Numbers to Words doesn’t actually require written out numbers, but can use actual digits as well, you could simply prepare a .txt file as follows:

… and so on. This way every pair of pages will show the same number.

Or another use: InDesign supports traditional Hebrew numbering, which uses letters instead of numerals. However, there is a custom to replace certain numbers – numbers that, when converted to letters, spell out words with negative connotations, such a 304 (שד = demon) or 270 (רע = evil) – with more pleasant numbers (the letter order is simply switched around).

Page Numbers to Words can deal with this very easily, of course. Simply prepare a list of numbers as a text file, replacing any numbers with their alternatives, as needed.

Please write any questions and comments below. Feel free to share how you’ve used Page Numbers to Words for your project. And, if you have prepared a number list in a different language and wouldn’t mind sharing it, get in touch and I’ll be happy to post it here.