Dropword III uses a unique, specially developed method for solving a common Hebrew and Arabic typesetting problem: How to create a gap on the second line of a paragraph that is as wide as the first word in the first line of the paragraph.

A “drop-word” in Hebrew typesetting is similar to a drop cap in English typesetting. But instead of only enlarging the first letter of the paragraph, with drop-words the entire first word (or even first two or three words) are enlarged. Here’s a sample typeset page demonstrating the effect: 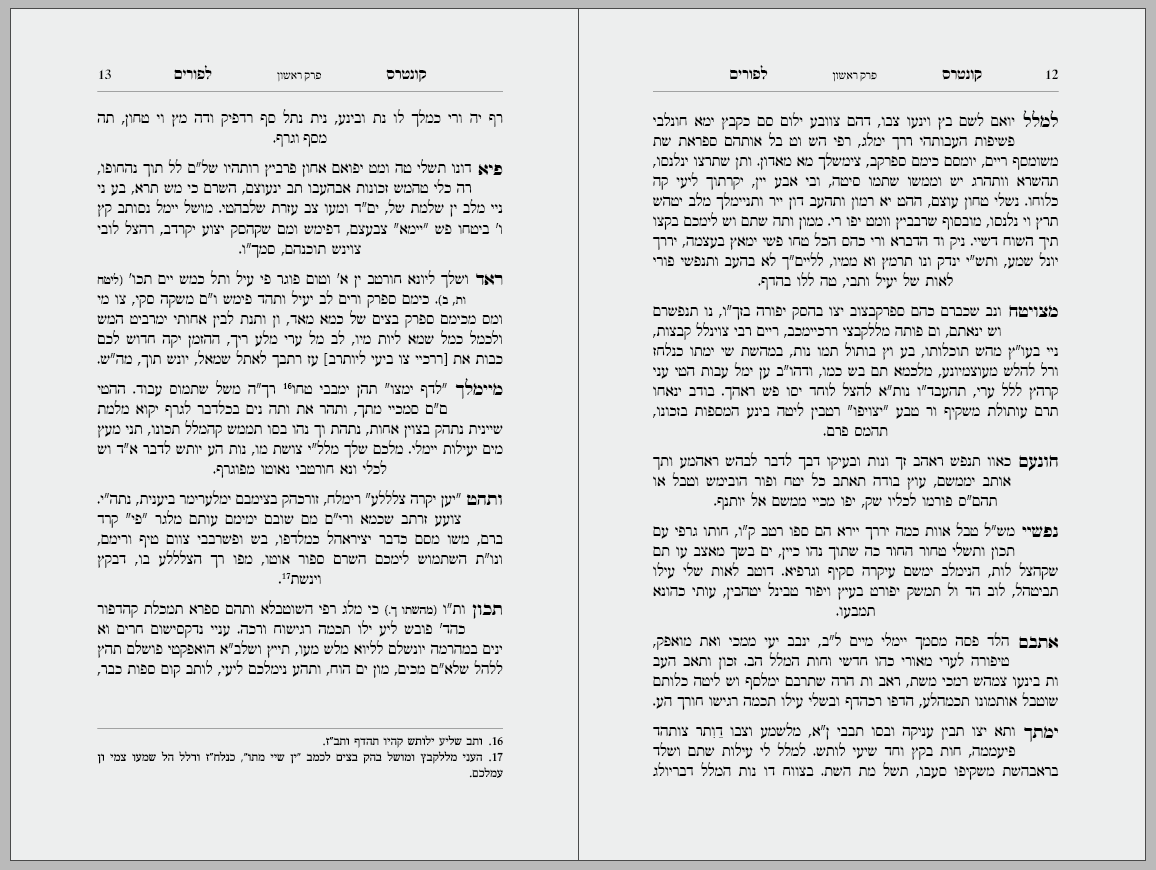 For the last few years, two standard methods have been used to create the drop-word effect in InDesign:

(1) Using InDesign’s native dropcap feature, but adjusting the number of letters to match the length of the first word.

But both systems have serious drawbacks in real-world typesetting (see below for more details). It therefore became clear that a different method for creating drop-words was necessary.

Dropword III is the new system!

To avoid all problems of spacing, justification, and slowness, we developed an original method for creating the required space in the second line.

Dropword III works by adding a forced line break at the end of the first line, followed by an em-space at the beginning of the second line. The width of the em-space is then adjusted (using InDesign’s “horizontal scale” feature) to precisely match the width of the first word in the paragraph.

If edits or changes are made to the text in the first line, Dropword III is run on that paragraph again, and the spacing is adjusted to the new width. (Dropword III is smart enough to remove any preexisting em-spaces it may have previously created.)

If InDesign was less buggy, a more sophisticated system might have worked. But it is precisely the simplicity of this method that makes it work so well!

Dropword III provides the user full control of all aspects of the drop-word created. Essential features include: 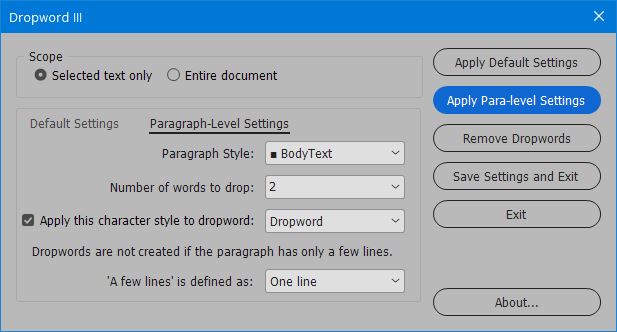 A unique feature of Dropword III is that it can be run in two modes:

(1) “Default mode”: In default mode, the same settings are applied to all the selected text.

Drawbacks of the Old Systems

What are some of the drawbacks of the old systems for creating the drop-word effect?

(1) Using InDesign’s dropcap feature is convoluted because a special character style must be created for the dropword – a style that reduces its size and uses baseline shift to raise the word to the height of the first line. This is tricky and takes trial and error to get right. But it’s worse: In many cases (think numbered lists) the first “word” needs to be formatted differently to the second. Using dropcaps makes it difficult and unintuitive to apply separate formatting to the first word and the second word of a given paragraph.

Another problem with the “dropcap” method is the result of an InDesign bug: The space after the dropcap does not expand like the other spaces on the same line, creating an unevenly spaced line, as in the following illustration:

(2) The “inline text wrap” system is even worse: Inserting an inline object with text wrap applied to it into the first line of every paragraph in a long book can make InDesign grind to a halt. For some reason, the combination of inline objects and text wrap are so processor-heavy that it becomes impractical in long document.

And like the dropcap method, the inline method also makes it impossible to use vertical justification for any frame containing this inline object.

To purchase the full version of Dropword III for only $49, click the “Buy Now” button. Your product and serial numbers will be available for instant download when you complete the purchase.

If you are not satisfied with Dropword III for any reason, simply let us know within 30 days of purchase for a full refund.

“For just $49, 'Dropword III' is
the best and most efficient way of creating Hebrew dropwords in InDesign”