There have been updates to many Id-Extras add-ons recently. In most cases, emails were sent out to anyone who had purchased the product in question, but not always. And since January there has been no “Script Update News” on the Id-Extras blog. In future, I hope to write shorter blog posts whenever any product is updated, but for now, here’s a whopping big summary of all the work that has been going on behind the scenes at Id-Extras in the past few months!

And a reminder: To check whether you have the latest version of a purchased product, check out the bottom of the My Account page. It lists all Id-Extras products, with their current version number and date of release. If you don’t have the latest, you can also download it from that page.

V-Justify – the InDesign add-on that puts you in control of InDesign’s vertical text-frame justification – has received several major updates since it was released. Here’s a quick summary:

In version 1.2.0 the user interface (UI) became completely responsive! This means that you can keep it open while you work, and that makes the fiddly stage of setting up the min and max values much easier!

(1) Firstly, the value fields in the UI now support all units, respond to the Up and Down arrow keys (with or without shift), and support basic maths operations, just like InDesign’s regular number-input fields.

(2) A substantial improvement is that there are now two justification styles, “Normal” and “Tight,” which can be chosen from the new dropdown (see screenshot below). The difference is as follows:

Having these two options available makes it possible in some cases to fix chapters where the last page of the chapter only has a line or two of text. Choosing the tight style may result in those lines being pulled up onto previous pages. It also provides a choice for the designer who may feel that a certain page will look better with more text on it, or less. Again, it is not always possible to justify the page in a particular way, but at least the designer is now able to guide the software in the direction he or she prefers.

With the ability to choose between tight or loose justification styles, and user-friendly, familiar controls, V-Justify becomes a powerful tool in any designer’s arsenal! 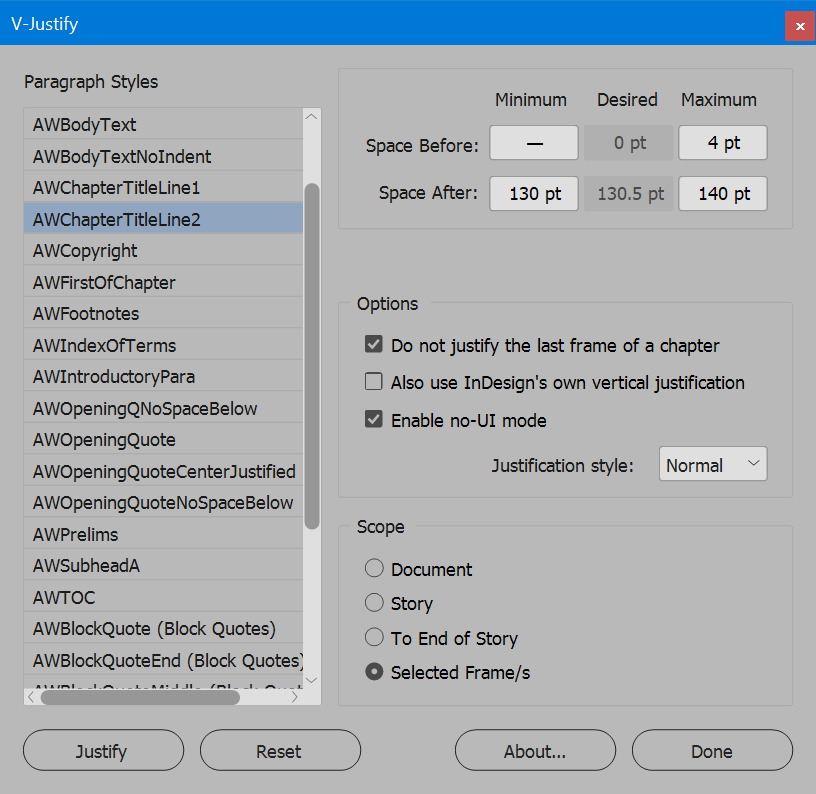 I’m very pleased with this update! Until now, any fields formatted in FormMaker as date or time fields, or using the free “arbitrary” option didn’t carry through properly to Acrobat. The formatting worked, but inspecting the field in Acrobat’s Properties panel wouldn’t show the type formatting applied correctly. This has now been fixed, and all formatting options, including date, time, and “arbitrary” now carry through to Acrobat properly and display correctly in the Properties panel. This was something that bothered me for a while, but only recently was I able to figure out the root of the issue!

A nice addition to Auto Char Styles (the script that creates character styles from local overrides in the text) solves an old problem – when many new character styles are automatically created, it can be tedious to sieve through them all and delete or merge the unneeded ones.

To aid this process, Auto Char Styles now makes it possible to right-click on any character style in the Character Styles panel and choose a new command – “find next style.” This takes you directly to the next instance of that character style in the document and sets up InDesign’s Find/Change dialog so you can easily find all instances of this character style, examine whether it’s needed or not, and delete or merge it as appropriate. For good measure, a similar command is added to paragraph styles in the Paragraph Styles panel, if you right-click on a style.

A fix to a long-standing bug: The “sticky masters” feature never worked properly with object styles. Now it does!

More importantly, Mastermatic repeatedly applies masters until there are no changes or if a vicious cycle situation is created. This resolves an issue where, if a document has different margin settings on different master pages, applying a particular master would cause text to flow to the next page. This text reflow meant that the master pages were again out of sync.

Another important new feature (added in 2.2.0) is the ability to load Mastermatic settings from another InDesign document. So if you have a series of documents that share the same styles, it is no longer necessary to set up Mastermatic afresh each time: just load the settings from the earlier document! Great time-saver!

A fantastic addition to this useful InDesign add-on is the option to now “always fit page.” So you can choose whether to keep the entire spread or the current page centered while you work. (I still don’t know how people can do any serious work in InDesign without this Always Fit Spread! A sentiment shared by many users!)

Dropwords is a concept of interest mainly to Hebrew typesetters. Essentially, it is the Hebrew version of drop capitals (see the example below).

Previously, Dropword III worked by inserting an em-space in the second line and then adjusting its horizontal scale to create the blank space under the word in the first line.

This lack of smoothness meant that it was not always possible to create a window of precisely the right width.

Some experimenting has shown that better results are achieved if, instead of inserting an em-space, a simple tab is inserted in the second line. Using tabs allows the second-line gap to be created precisely.

Version 3.5.0 introduces this change: Tabs are now used instead of em-spaces and the results are far better.

Extract Pages received an update to fix a bug that occurred when blank, threaded text frames existed at the end of a story.

That’s it for this installment of Script Update News! I hope you found something to interest you here. If you are using any of these scripts, I’m sure you’ll find the updates useful!

We have some exciting stuff in store, including a major overhaul of the Translate add-on. More about that here soon, so if you have not yet subscribed to the Id-Extras blog, make sure to do so now!