One-click translation of your InDesign document!
Id-Extra’s Translate add-on for InDesign uses the power of DeepL™ (and/or Google™ Translate) to change your document’s language while retaining the document’s look, layout, and formatting!

December 2022 update: We have switched to DeepL.com as our main machine-translating provider. (However, the old Google Translate add-on is included in the download package as well.)

Integrate Translate into your InDesign translation workflow without an initial major investment of time and money.

Download Translate, buy (for starters) a $5.00 Translation Key, and you’ve got 1-click InDesign document translation at your fingertips!

There is no up-front investment, and no commitment. Try it, and be amazed!

Save $1000s of Dollars Every Month on Translation Costs

DeepL’s NMT engine, which Translate uses, is phenomenal! We all remember machine translations from a few years back which were pretty dreadful. But technology has advanced in leaps and bounds, and the situation today is different.

If you haven’t checked out the latest developments in machine translation, you’re in for a surprise!

Do you still need a post-translation editor? Of course! But the costs of editing are much lower than translation from scratch!

Why not give Translate a test drive and see for yourself!

Requires InDesign CS6 or higher on Windows or Mac computers. Works also with the latest version of InDesign. 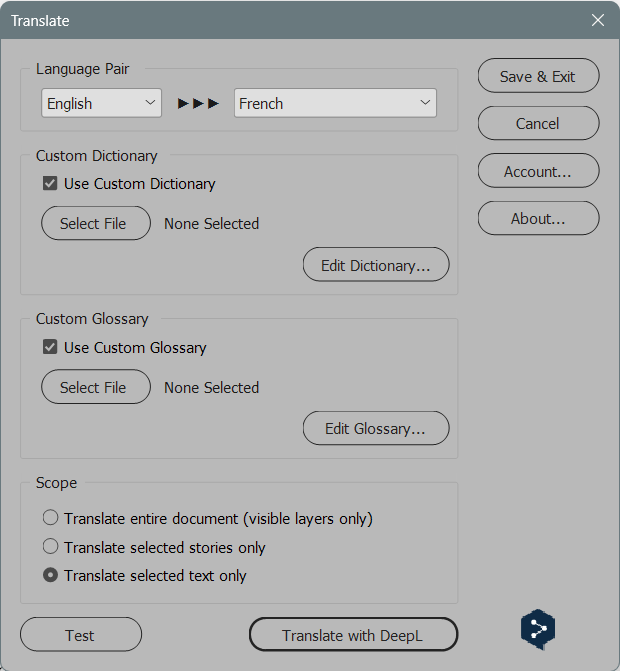 Post-editing machine translations (also known as MTPE, or Neural-MTPE) is an increasingly popular translation workflow. Up to 40% time-savings are reported by some studies.

The way MTPE works is that the initial translation is done by a computer. The result is then post-edited by an editor.

Translate for InDesign facilitates this workflow in two important ways:

(1) You translate your document using DeepL’s powerful NMT without leaving InDesign. Layout, formatting, character and paragraph styles are all retained! So no messy (and lossy) IDML exporting needed as with other systems.

(2) You do the post-editing also right inside InDesign or InCopy with the advantage for the editor that they are working on the document itself and can see everything in context. Using traditional computer-assisted translation systems, each phrase is presented separately in a table, waiting to be translated or edited. This is an unnatural way for a human being to read a text, and again studies have shown that many editors and translators forgo taking advantage of computer-assisted translations solely for this reason, preferring instead to translate the whole thing manually in Word, where they can see full sentences and paragraphs.

With Translate this becomes a non-issue. The editor works on the InDesign or InCopy document, with all sentences and paragraphs displayed in full and adjacent to any images, graphics or tables that they may refer to in the layout, as the designer intended, and as the end-user will themselves see the document.

The first step is to buy a “Translation Key”. This costs a fixed fee: $5 USD, which comes with enough credit to translate 100,000 characters, or very roughly 14,000 words.

The second step is optional. At any stage, you may top-up your Translation Key with extra credit. You may purchase as much credit as needed (you will be asked to type in the amount you want; the minimum is $5, but if you need another $100, say, type in $100).

But generally, even for several people working on multiple computers, a single, shared Translation Key is enough.

To learn how to use all of Translate‘s features including setting up a custom dictionary, a full User Guide is available here.

Download Translate for InDesign by filling in your name and email below. It will be sent to your inbox automatically. (By doing so you also agree to receive occasional promotional emails from Id-Extras.com.)

If you already have a Translation Key, you can purchase additional credit here.