If you or your team spend time creating interactive PDF forms in InDesign, you may remember with a groan the moment it registered that designing functional and elegant form fields with carefully chosen fonts, color and default text is a waste of time because this formatting does not survive the trip from InDesign to Acrobat! All formatting must be reapplied in Acrobat, and if any edits are made to the original form in InDesign, the cycle must be repeated – again and again.

FormMagic restores sanity to this process! With FormMagic, design the form exactly as needed in InDesign, freely including font formatting, text alignment, and default form field text (even Acrobat comb fields are supported!). Ready? Export the interactive form to Acrobat, and FormMagic ensures that all these details are restored with one click! 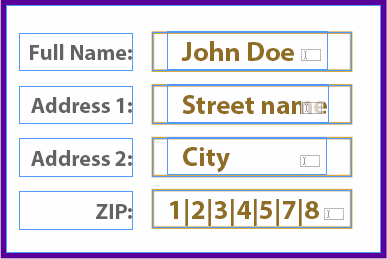 2. Here’s what the same form will look like after it is exported from InDesign and opened in Acrobat without FormMagic. The formatting in the fields that was there in InDesign has been lost: wrong font, no color, and the text that is shown had to be typed manually in Acrobat. 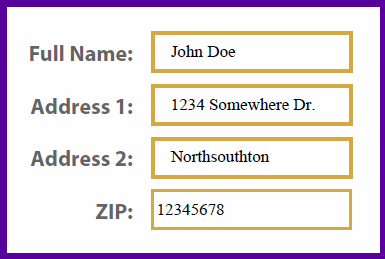 3. After running FormMagic on this form in Acrobat, here’s what it looks like! 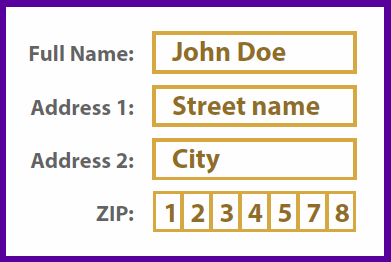 The formatting is restored, and the PDF form looks like it did in InDesign! The font is correct, the same text color is preserved, the default text is there, and notice also that the ZIP field has been automatically converted into an Acrobat comb field (one number per cell).

FormMagic and FormMaker can do much more than this. But this demonstrates the basic idea!

After you’ve downloaded and installed FormMagic (see below), create and style your interactive form in InDesign.

1. Run the FormMagic script in InDesign (double-click on it in the Scripts panel). If all is well, you will see an alert saying that the data has been successfully stored.

2. Continue by exporting the PDF form from InDesign as usual for interactive PDF forms, and open in Acrobat. In Acrobat, select the new FormMagic command (Edit>FormMagic – it’s a new entry at the bottom of the Edit menu).

Finished! All the formatting and styling you applied to your form in InDesign is restored to the interactive PDF form in Acrobat Pro!

3. When the interactive PDF is ready for distribution, optionally run the “Purge FormMagic data” command at the bottom of the Edit menu in Acrobat. This will purge FormMagic data from the PDF, thereby reducing the final PDF file size.

The Free Edition is identical to the Pro edition, except that it is limited to a single-page form, and up to 10 form fields only.

In the download package of FormMagic you will find a text file called “Installation Instructions.” Follow these instructions carefully. They will tell you how to install FormMagic on your computer.

If you need help installing FormMagic on your computer, please contact us.

What formatting is restored by FormMagic?

FormMagic also allow you to rotate text fields in InDesign. The rotation will carry through to Acrobat (to the nearest 90°).

Additionally, you can create combs in InDesign with FormMagic. What is a comb? It’s a type of form field where each character is separated by a vertical line, and you can type only one character per box, like this:

To create a comb in InDesign, create a form text field and separate the text inside the field with the vertical bar character (it looks like this: |). It will be converted to a comb field in Acrobat when you run FormMagic!

FormMaker Pro includes everything that comes with FormMagic, but adds the possibility of adding Acroscripts to forms, directly within InDesign. So if you need to add validation scripts, calculation scripts, formatting scripts, or scripts triggered by keyboard or mouse events to your PDF form, FormMaker Pro allows you to add them directly in InDesign, again avoiding the crazy round-trip between Acrobat and InDesign whenever edits are made.

Subscribe to the yearly plan of FormMaker Pro and receive FREE assistance with writing the basic Javascripts needed for your interactive PDF forms! (Terms and conditions apply, please inquire.)

Click here to see an example of how FormMaker was used to add an Acroscript in InDesign that converts a user’s input into all-capital letters (just one of limitless possibilities).

From a presentation by Damian Sian, accessibility expert, speaking at the A11YNYC Group in Dec. 2016, demonstrating FormMagic’s essential role in creating accessible PDFs.

FormMagic is available in 3 editions:

FormMagic Pro works with forms of any length but does not include the ability to add Javascript validations to form fields inside InDesign.

FormMaker Pro works with forms of any length and has all features, including adding Acrobat validation, calculation, and formatting scripts right inside InDesign, as well as scripts triggered by mouse and keyboard events!

To sign up for FormMagic Pro or FormMaker Pro click the appropriate button above. Your product and serial numbers will be available for instant download when you complete the purchase.

If you are not satisfied with FormMagic for any reason, simply let us know within 30 days of initial subscription for a full refund. After that, you may cancel your subscription at any time.

“FormMagic … I can't say enough good things about it!”