A script to help with InDesign’s optical margin alignment mess

A script to help with InDesign’s optical margin alignment mess

InDesign’s optical margin alignment (OMA) is a great feature for the discerning typographer. It attempts to make the left and right edges of justified text optically aligned. So punctuation marks are pushed slightly into the margin, and several other adjustments are made as well. Whether the result is successful or not it is up to everyone to decide for themselves. However, it’s definitely nice that the option exists.

What is less nice is the roundabout, counter-intuitive way Adobe implements this feature.

It’s easiest to explain how it should have worked: You edit the paragraph style for which you would like to enable optical margin alignment by checking the “Enable Optical Margin Alignment” checkbox. Finished! Now all text using that style has OMA enabled.

However, there is no such checkbox! What the checkbox actually says is, “Ignore optical margin alignment”! Because the way OMA has been implemented in InDesign is that (1) You enable it on a per-story basis, meaning that all text belonging to an InDesign story has OMA switched on. This is done by going to Type>Story and checking the “Optical Margin Alignment” checkbox. (2) Now, if there is text where you do not want OMA to be applied, you have to edit each paragraph style individually and set it to ignore OMA.

In fact, the script gives you 3 choices (see screenshot below): To enable Optical Margin Alignment for all paragraphs, to disable it, or to toggle the current setting.

Bear in mind that if you toggle the current setting and some paragraph styles are based on others, their setting might change as well.

So I hope this goes some way to making Optical Margin Alignment more accessible in InDesign. 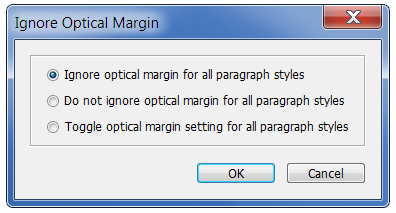 To download Break Text Thread, fill in your name and address and it will be automatically emailed. By doing so you also agree to receive occasional emails from Id-Extras.com with interesting InDesign tips and tricks, news, and free scripts.